As part of the contextual inquiry of Feeler’s prototype design, a participatory workshop was held with MA students of the School of Arts, Design and Architecture.

The aim of the workshop was to collect information about challenges dealing the combination of Quantified Self data (QS) with Learning Analytics, as well developing a better understanding of the conditions for reflection and behavior change.

In order to introduce the stages of reflection identified by academic research, as well as the initial approach to the tool design, a game was created. The use of a game was perceived as an effective strategy for presenting the design ideas and challenges dealing with reflection to the participants rather than having a traditional presentation. In this regard, the game was used as a way of breaking the ice, putting participants into situation and what’s more important, getting them familiar and interiorize the situations in which the prototype would be used. The game was followed by a discussion about several design issues dealing with motivation, challenges dealing with data collection and its visualization and how to better support behavior change.

The game design followed a journey structure. At the beginning of the game, each player picked a character that had some problem dealing with learning and a particular motivation for engaging in QS (the different motivations were established according to the research developed by Gimpel et al., in press). Each square represented a specific moment in the process of self-monitoring such as deciding the type of data to monitor, setting a question, selecting how to visualize the information, as well as facing problems dealing with data collection and the analysis of the data. The decisions about the number of squares and its content were informed by research on reflection in learning. In order to make the game engaging and easy to play, the terms used in academic literature were modified and synthetized. During the game the players consciously took some decisions, although in some occasions they just rolled the dice and this determined the consequences.

Couple of weeks before the workshop, a low-fi prototype of the game was tested with the LE group community who gave feedback and suggestions for improving the game (many thanks to Jukka Purma, Kiarii Ngua, Sanna Vilmusenaho, Antti Keränen, Akshay Roongta and Leyla Nasib for their comments). 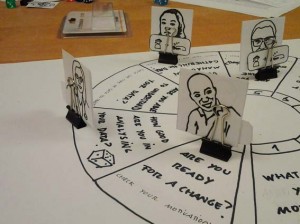 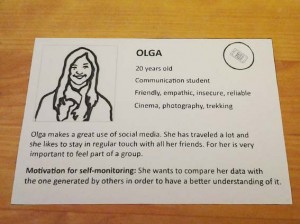 According to the feedback provided, the game was redesigned. The game used in the workshop that took place on Wednesday, December 18th was done in collaboration with Juan F. González, who contributed to the game visual design and to the workshop visual documentation. 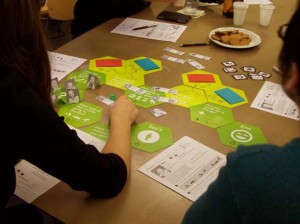 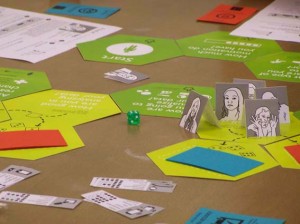 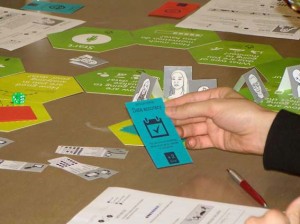 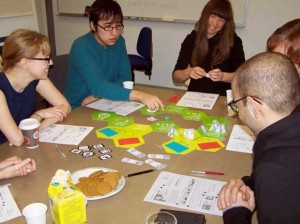 The participants’ comments during the discussion brought interesting insights, especially in aspects dealing with motivation and data visualization. From their point of view, meaningful feedback as well as early detection of trends and patterns can motivate people to keep using the tool. In this regard, they highlighted the role of data visualizations for detecting relations among data and helping the user identify problems. Although some of the participants expressed that they would like to be able to check the raw data about their activity, they considered that visualizations could go further than just representing the data and show some initial analysis.

In relation to the type of data monitored, some of the participants considered important to include subjective and qualitative data. Therefore, users would be able to find more personalized data that really takes into consideration how they feel in a specific situation. Some of the attendants also expressed their interest in monitoring information dealing with food, mood or weather.

The decision about what to track in learning analytics was difficult. From the participants’ point of view learning cannot be restricted to academic contexts since it happens everywhere and at very different moments. Regarding Feeler prototype design, in order to avoid misunderstandings with the concept of learning, one option could be using a different term such as “academic activity”. Although there wasn’t a clear consensus about what would be more meaningful to monitor, one acceptable option would be to focus on the amount of time dedicated to a particular course.

Finally, there was an interesting debate about the role of rewarding. Should a reward system be included in the design of Feeler? Some social media services as well as software associated to QS devices are already including some sort of rewards, so this is certainly something to think about. Participants were critical about this aspect since in some cases, rewards don’t bring any clear benefit to the user.

Feeler co-design workshops
Workshop on Awareness and Reflection in TEL